Watch our new video to learn more about Rivera Law Firm, LLC and how we can help you with your legal needs. 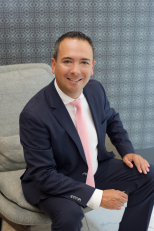 Esteban A. Rivera is admitted to practice as an attorney in the State of Minnesota and Ecuador, South America. In 2013, he founded Rivera Law Firm, LLC. At Rivera Law Firm, he serves as a managing partner and practices mainly Immigration Law. He handles employment-based immigration, investment-based imigration, and family-based immigration cases before the U.S. Citizenship and Immigration Services (USCIS). He also represents clients in removal proceedings in front of the Executive Office for Immigration Review (Immigration Court), Board of Immigration Appeals (BIA), and the U.S. Court of Appeals for the 8th Circuit. He also practices International Law with emphasis in Latin America.

Prior to founding Rivera Law Firm, he worked at Igbanugo Partners Int'l Law Firm, PLLC, where he worked mainly on Business Immigration and Individual Immigration matters. He worked at Igbanugo Partners for over three years handling very complex cases before USCIS, Immigration Courts, BIA and the U.S. Court of Appeal for the 8th Circuit. He represented hundreds of clients in all levels of U.S. immigration matters, including 500 Fortune companies as well as individual clients, and also in various litigated civil and criminal matters.

Prior to joining Igbanugo Partners, he worked as judicial extern to the Honorable Michael J. Roith in Anoka County, Minnesota. During the summer of 2009, he was selected as Minnesota Justice Foundation Summer Law Clerk and worked at Southern Minnesota Regional Legal Service in the Refugee, Immigrant, and Migrant Unit where he also handled immigration cases.

Born and raised in Quito, Ecuador, Mr. Rivera is a native Spanish speaker. He received his law degree from the Pontificia Universidad Católica del Ecuador, where he graduated in the top 5 percent of his graduating class. Mr. Rivera worked for over five years as an associate and law clerk for two well-known law firms, where he practiced Intellectual Property and Corporate Law, representing mainly Forbes Global 2000 companies.

Mr. Rivera received his Juris Doctor degree from Hamline University School of Law in December 2010. At Hamline University, he was active in a variety of academic and extracurricular activities. He served as an Associate and as an Associate Editor for the Hamline Law Review. He also was a member and guest judge of the Intellectual Property Giles S. Rich Moot Court Competition. He served as legal research assistant to Professor Z. Jill Barclift. He was awarded with the Justice Thurgood Marshall Scholarship and named on the Hamline University School of Law Dean’s Honor Roll numerous times. He was also the Latino Law Student Association treasurer.

Mr. Rivera served as President of the Minnesota Hispanic Bar Association and has been a Board Member and an Officer since 2009. He has also been serving as a Board Member of the Hennepin County Bar Association (HCBA) and its Diversity Committee since 2011. He served as the President of the HCBA in 2020-2021. He volunteered at Linea Legal Latina and currently volunteers at Volunteer Lawyers Network. He is the Coach of the Mitchell Hamline School of Law team at the Hispanic National Bar Association Uvaldo Herrera Moot Court Competition. His team took first place in the nation in 2019-2020.

Mr. Rivera is a member of the following organizations: